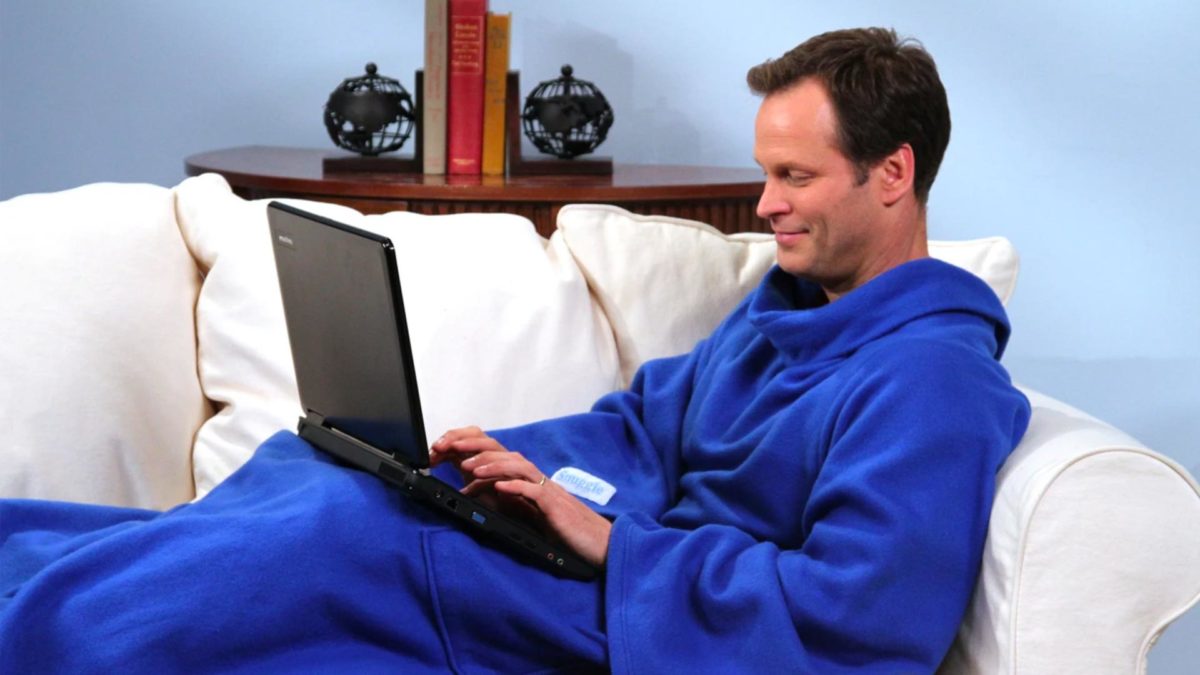 The latest obsession to hit the Channel V Media offices is not the best new marketing tool or hottest social media fit; it’s, undeniably, the Snuggie. This odd blanket-with-sleeves has capitalized on winter, a weak economy, and plain old human curiosity to sell over 4 million units. Yes, 4 million people are now being warmed by the piece of “fabric” (more on that later) that was described by an incensed shopper at Walgreen’s as “a backwards robe.”

AdAge has even picked up on the phenomenon from the all-important business angle and as a PR/marketing firm, CVM must admit that the Snuggie fell in with a good crowd. YouTubers have latched on with parodies, members of The Today Show crew were swaddled in Snuggies last week, and a Google search for “snuggie” returns an unfathomable number of results. It just goes to show that for all of the metrics and precise marketing, sometimes you just don’t know what’s going to work. We’re not too proud to admit that had this come our way, we probably would have accepted the freebies, but wouldn’t have taken on the account. Sure we’re forward-thinking, but you can understand why even our keen foresight was tested by the Snuggie.

Frighteningly, I haven’t been able to find out what exactly makes a Snuggie so snuggly aside from the “super soft, thick, luxurious fleece.” And since I’m the one in the office who is most apt to read ingredient labels, this really concerns me. Even more so because the Snuggie commercial features a happy family in long-sleeve Snuggies roasting marshmallows on short sticks very close to a campfire. In fact, you are probably witnessing their final moments before they go up in “super soft, thick, luxurious” flames.

Which brings me to my next point: the similarities between the luxurious Snuggie and the flowing garb of the Roman Catholic monk are hard to ignore. While the jury is still out, I’m wondering if this is not some scheme by Ron Howard, Tom Hanks, and Sony Pictures to promote Angels & Demons, in theaters May 15 (shout out, Rustin). But since the Snuggie predates the movie (though not the book…hmm), this could be a marketing move by the Catholic Church to revamp their image after, well, you know. At any rate, I’m willing to put down ten bucks that a disproportionate percentage of Snuggie-philes are wearing these things into confessional. (“Forgive me father for I have sinned. Seriously, check out my outfit.” Something like that anyway.)

For all of its success, the Snuggie was not the first incarnation of a blanket-with-sleeves. But, as my friend Cory once told me, “There was Yahoo! before there was Google,” and being first doesn’t always translate to market domination. The Slanket came out in 1998 to much less fanfare and despite its heavy use of content and description (aha, it is made of “100% Polyester Microfibers (Big words for Super-Soft)”) on its site and its eleven, yes, eleven, color options, it remains far behind the Snuggie in popularity and sales. The Slanket also donates a portion of its sales to charity which may or may not up the cool factor, depending on your worldview. (And according to recent research by Story Worldwide, donations to charity and tax breaks don’t persuade consumers anyway. Sorry, Slanket.)

On that note, at Channel V Media we like rooting for the underdog, so I implore you to take your fascination with the Snuggie and turn it toward the Slanket. It’s not the subject of parody or daytime TV, it doesn’t come with the Snuggie’s fancy book light and it does recognize that you may become a walking (or laying) fire hazard upon donning it, but when it comes right down to it, all you really need is big (cotton) sweatshirt anyway.