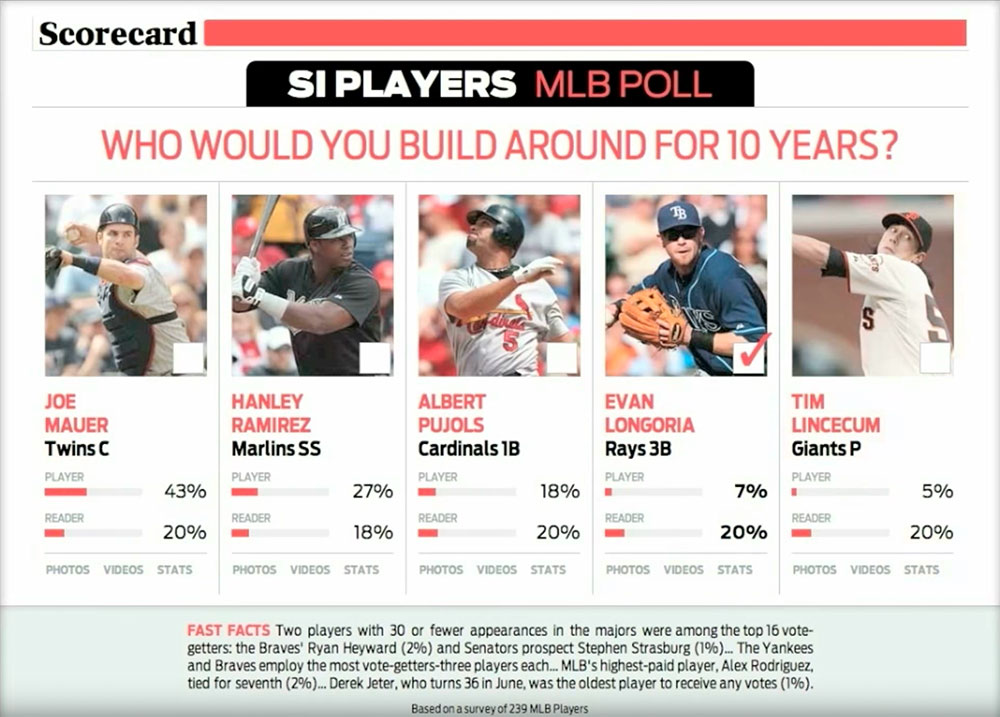 Does HTML 5 Make “Rich vs. Reach” a False Choice?

The competition between the Web and proprietary rich platforms, including Windows, Mac OS, iPhone/iPad, Adobe’s Flash/AIR and Microsoft’s Silverlight, is not new. But with the emergence of HTML 5 and imminent support for it in the next release of the major Web browsers, the battle is heating up. And with the announcements made Wednesday at Google’s I/O conference, it’s getting kicked up yet another notch.

The impact of this platform battle on companies in the media and advertising world, and the developers who serve them, is significant. The most prominent question is whether video and rich media online will shift towards pure HTML and away from plug-ins like Flash and Silverlight. In fact, certain features in HTML 5 make it suitable for development for line of business applications as well, further threatening those plug-in technologies.

So what’s the deal? Is this real or hype? To answer that question, I’ve done my own research into HTML 5’s features and talked to several media-focused, New York area developers to get their opinions. I present my findings to you in this post.

Before bearing down into HTML 5 specifics and practitioners’ quotes, let’s set the context. To understand what HTML 5 can do, take a look at this video of Sports Illustrated’s HTML 5 prototype. This should start to get you bought into the idea that HTML 5 could be a game-changer.

Next, if you happen to have installed the beta version of Google’s Chrome 5 browser, take a look at the page linked to below, and in that page, click on any of the game thumbnails to see what’s possible, without a plug-in, in this brave new world. (Note, although the instructions for each game tell you to press the A key to start, press the Z key instead.). Here’s the link:

As an adjunct to what’s enabled by HTML 5, consider the various transforms that are part of CSS 3. If you’re running Safari as your browser, the following link will showcase this live; if not, you’ll see a bitmap that will give you an idea of what’s possible:

Are you starting to get the picture (literally)? What has up until now required browser plug-ins and other patches to HTML, most typically Flash, will soon be renderable, natively, in all major browsers. Moreover, it’s looking likely that developers will be able to deliver such content and experiences in these browsers using one base of markup and script code (using straight JavaScript and/or jQuery), without resorting to browser-specific code and workarounds. If you’re skeptical of this, I wouldn’t blame you, especially with respect to Microsoft’s Internet Explorer. However, i can tell you with confidence that even Microsoft is dedicated to full-on HTML 5 support in version 9 of that browser, which is currently under development.

So what’s new in HTML 5, specifically, that makes sites like this possible?  The specification documents go into deep detail, and there’s no sense in rehashing them here, but a summary is probably in order.   Here is a non-authoritative, but useful, list of the major new feature areas in HTML 5:

Taken together, these features position HTML to compete with, and perhaps overtake, Adobe’s Flash/AIR (and Microsoft’s Silverlight) as a viable Web platform for media, RIAs (rich internet applications – apps that function more like desktop software than Web sites) and interactive Web content, including games.

What do players in the media world think about this?  From the embedded video above, we know what Sports Illustrated (and, therefore, Time Warner) think.  Hulu, the major Internet site for broadcast TV content, is on record as saying HTML5 video does not pass muster with them, at least not yet.  YouTube, on the other hand, already has an experimental HTML 5-based version of their site.  TechCrunch has reported that NetFlix is flirting with HTML 5 too, especially as it pertains to embedded browsers in TV-based devices.  And the New York Times’ Web site now embeds some video clips without resorting to Flash.  They have to – otherwise iPhone, iPod Touch and iPad users couldn’t see them in the Mobile Safari browser.

Speaking of the iPad, MIchael Scafidi, Razorfish’s Technology Director and Presentation Layer Technology Practice Lead, in the firm’s New York City office, believes it to be a catalyst for HTML 5 adoption.  When I asked him whether he thought Flash would lose share to the new open Web standard, he said “For advertising on the iPad, yes, specifically due to the lack of support of Flash on the iPad.” On the current state of the art in Web browsers, Scafidi commented “IE 8 will not support HTML 5 in banners so an alternative will need to be used until IE9.  Outside of the iPad and iPhone Flash will still be used for more immersive media and advertising.”

What do other media-focused developers think about all this?  I talked to several to get their opinions. Michael Pinto is CEO and Founder of Very Memorable Design whose primary focus has been to help marketing directors get traction online.  The firm’s client roster includes the likes Time, Inc., Scholastic and PBS.  Pinto predicts that “More and more microsites that were done entirely in Flash will be done more and more using jQuery. I can also see slideshows and video now being done without Flash. However if you needed to create a game or highly interactive activity Flash would still be the way to go for the web.”

A dissenting view comes from Jesse Erlbaum, CEO of The Erlbaum Group, LLC, which serves numerous clients in the magazine publishing sector.  When I asked Erlbaum whether he thought HTML 5 and jQuery/JavaScript would steal significant market share from Flash, he responded “Not at all!  In particular, not for media and advertising customers!  These sectors are not generally in the business of making highly functional applications, which is the one place where HTML5/jQuery/etc really shines.”

Ironically, Pinto’s firm is a heavy user of Flash for its projects and Erlbaum’s develops atop the “LAMP” (Linux, Apache, MySQL and PHP/Perl) stack.  For whatever reason, each firm seems to see the other’s toolset as a more viable choice.  But both agree that the developer tool story around HTML 5 is deficient.  Pinto explains “What’s lost with [HTML 5 and Javascript] techniques is that there isn’t a single widely favored easy-to-use tool of choice for authoring. So with Flash you can get up and running right away and not worry about what is different from one browser to the next.“  Erlbaum agrees, saying: “HTML5/Javascript lacks a sophisticated integrated development environment (IDE) which is an essential part of Flash.  If what someone is trying to make is primarily animation, it’s a waste of time…to do this in Javascript.  It can be done much more easily in Flash, and with greater cross-browser compatibility and consistency due to the ubiquity of Flash.”

Adobe (maker of Flash since its 2005 acquisition of Macromedia) likely agrees.  And for better or worse, they’ve decided to address this shortcoming of HTML 5, even at risk of diminishing their Flash platfrom. Yesterday Adobe announced that their hugely popular Deamweaver Web design authoring tool would directly support HTML 5 and CSS 3 development.  In fact, the Adobe Dreamweaver CS5 HTML5 Pack is downloadable now from Adobe Labs.

Maybe Adobe is bowing to pressure from ardent Web professionals like Scott Kellum, Lead Designer at Channel V Media,  a digital and offline branding firm, serving the media and marketing sectors, among others.  Kellum told me that HTML 5 “…will definitely move people away from Flash. It has many of the same functionalities with faster load times and better accessibility. HTML5 will help Flash as well: with the new caching methods you can now even run Flash apps offline.”  Razorfish’s Scafidi, on the other hand, believes “on the platforms that support both [Flash and HTML 5] it will be the best technology that meets the business needs that will prevail.”

Although all three Web developers I interviewed would agree that Flash is still required for more sophisticated applications, Kellum seems to have put his finger on why HTML 5 may nonetheless dominate.  In his view, much of the Web development out there has little need for high-end capabilities: “Most people want to add a little punch to a navigation bar or some video and now you can get the biggest bang for your buck with HTML5, CSS3 and Javascript.”

I’ve already mentioned that Google’s ongoing I/O conference, at the Moscone West center in San Francisco, is driving the HTML 5 news cycle, big time.  And Google made many announcements of their own, including the open sourcing of their VP8 video codec, new enterprise-oriented capabilities for its App Engine cloud offering, and the creation of the Chrome Web Store, which the company says will make it easier to find and “install” Web applications, in a fashion similar to  the way users procure native apps on various mobile platforms.

HTML 5 looks to be disruptive, especially to the media world.  And even if the technology ends up disappointing, the chatter around it alone is causing big changes in the technology world.  If the richness it promises delivers, then magazine publishers and non-text digital advertisers may indeed have a platform for creating compelling content that loads quickly, is standards-based and will render identically in (the newest versions of) all major Web browsers.  Can this development in the digital arena save the titans of the print world?  I can’t predict, but it’s going to be fun to watch, and the competitive innovation from all players in both industries will likely be immense.