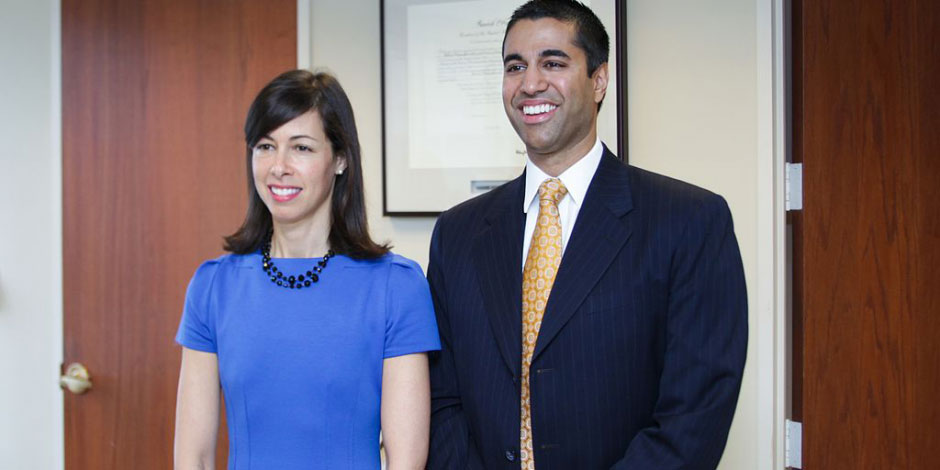 The hot-button issue facing consumers and advertisers alike is the looming threat of net neutrality being repealed by the FCC, which will put immense power in the hands of internet service providers.

The US telecommunications regulator received clearance from Congress this week to vote on deregulating the internet. But the question remains: will net neutrality be a death blow to the internet—and the way we market to consumers today? The Drum asked professionals from all over the marketing landscape about the potential impact of the FCC’s pending decision.

The FCC has said, “We should simply set rules of the road that let companies of all kinds in every sector compete and let consumers decide who wins and loses.” While this logic might work in the commodities or agriculture markets, we are dealing with an industry controlled by a handful of enormous companies. The pricing of their products and services must be regulated to ensure the consumer is treated fairly and competition among companies like AT&T and Comcast is maintained.

The marketing industry is already at the mercy of walled gardens, erected by Google, Facebook and others that control marketers’ access to consumers. The myth is that deregulating cable companies will allow capitalism to play out fairly. The reality is that in a market controlled by a handful of companies, deregulation leads to less competition. For marketers, this only means more walled gardens and less access to customers.

An interesting side effect of the repeal of net neutrality is how this could affect areas like reporting and tools. We often look at metrics such as page load speed and user journeys to identify problematic areas of sites and campaigns and to make improvements. It would be much harder to gauge a user’s experience if it’s being manipulated by their provider. If connection speeds are reduced for certain users, this could easily lead to frustration resulting in lower conversions – and thus make it difficult to separate potential UX issues from provider throttling. Or imagine sites that have components that are used across the web – like “Sign in with Facebook” – being impacted by those services being degraded or even blocked. Even though the site itself might not be throttled, vital services it depends on could be.

The loss of net neutrality will make marketers jobs more complex, increase costs to advertisers, and worsen the experience of consumers with brands. Why? Traditional, mass market brand campaigns have given way to complex omni-channel experiences. Ones that require brands and their marketing partners to orchestrate customer interactions that move from channel to channel, carrying the customer’s context and intent with them. These channels continue to expand to include a host of emerging IoT devices. Now imagine that Comcast decides to make its own smart home speaker and slow or block traffic to competing devices, like the Amazon Echo. Echo owners would face seriously degraded or broken brand experiences. To avoid this, brands would need to create platform specific campaigns and experiences, increasing their costs to engage with their customers.

From the earliest days of the commercial Internet, the concept of net neutrality has ensured a level paying field for all innovators. This approach allowed companies like Google and Netflix to bring fresh ideas to the masses, even as early leaders like Yahoo! and AOL began to fade. Abandoning net neutrality runs the serious risk of restraining innovation and enabling larger, more powerful companies an unfair and unprecedented advantage. It’s bad for start-ups, bad for consumers and bad for America.

Ironically, I think the biggest losers in the long run will be the cable and telecom giants who derive the immediate benefit from overturning net neutrality. Any time you become greedy or cynical toward consumers, you become a target for disruption. So some entrepreneur will roll out free national Wi-Fi, and it’s game over.

Net neutrality ensures the democratization of data services by ISPs. It’s easy to take for granted, but it keeps ISPs from charging different rates for the transmission of data, regardless of format or provenance. All data is 0’s and 1’s, and the ubiquity of the internet in today’s society makes the Title 2 classification of broadband a common-sense move. Startups, digital service providers, the media, and low-income internet users will be hit hardest by this move to deregulate ISPs. I suspect that the FCC commissioner will have a host of law suits to contend with, especially since his plan involves pre-empting any state-specific net neutrality provisions. Additionally, it’s pretty obvious that Chairman Pai hasn’t reviewed the millions of public comments that overwhelmingly support net neutrality. It’s a bad move that will only benefit large ISPs. The general public and a myriad industries will suffer as a result of this deregulation.

Net neutrality provides an even playing field for brands and marketers; quality of creativity and/or utility still dictates the net return. It also safeguards consumer choice—allowing people themselves to choose which brands they engage with, and what content they consume.

These truths would no longer apply with the ending of net neutrality and the introduction of paid for “fast lanes” of access. The promotion of messages from cash rich brands would increase exponentially, at the expense of leaner marketing rivals.

A counter argument is that this disintegration of consumer control in tandem with the proliferation of paid for advertising, is not a new phenomenon.

Search and social platforms have dictated what content gets seen and consumed for some time. And it has been done with little transparency or consistency.

One hypothesis is that ending net neutrality, introducing more regulation, could offer better clarity for marketers, but we’ll see.

Fast, reliable internet connectivity is now a pubic good, like water and electricity. If you don’t think so, try going an hour without your phone. What about no access to Twitter (aka President Trump)?

The FCC’s potential reversal of Obama-era net neutrality rules benefits few to the detriment of many. How many start-ups would have been launched without equal access? Do you really think data-heavy Facebook, Instagram and Snapchat would be here today without it?

And what about driverless cars? Data usage here will be extreme. What if an ISP or wireless provider has a disagreement with Ford or Tesla or Waymo. Crash boom bam?

Many of the largest ISPs in the US are both content owners and distribution providers. Being able to accelerate their owned and operated services seems fair, but throttling the internet to limit competitors’ services does not. Ever heard of anti-tying provisions?

If the web hadn’t been free and open when Big Spaceship was starting out, it could have drastically impacted the virality of our most successful projects. We were young and scrappy, and putting things into the world that gave people a new perspective on what the internet could be. They discovered and shared, and felt the internet was this magical place. Had those projects been throttled, the impact could have been diminished, and the internet economy wouldn’t have thrived in general.

The same could happen here, especially now that paid digital has matured. It will force brands to make use of certain platforms, like Facebook, where previously they might have found viral success just by leaning into the digital product itself. That will be limiting to smaller brands, agencies and platforms trying to carve their own space, and that limits the pace at which our industry will evolve.

When people with a better idea are forced to be successful within an environment created and controlled by an industry that only stands to lose by the very existence of their idea, innovation slows to a crawl and more often than not, dies completely. AT&T, Comcast and Verizon will absolutely monetize their pipeline by doing deals with other huge companies to limit disruptive technologies, products and services from gaining a consumer base. The disrupters will not have deep enough pockets to play that game. The end of net neutrality marks the beginning of the end for a stay-at-home mom with a great idea to turn an entire category upside down overnight.

I believe we will see a ‘repeal and replace’ in this space much sooner than in our healthcare system. Consumer-facing technology advancements are going to accelerate very quickly in the next couple of years, especially those related to device based video play-out and traditional broadcast delivery. New proposed standards, such as ATSC 3.0, will deliver incredible video quality to consumers imbedded with interactive view toolsets designed to enhance consumer experiences. Simply put, these types of advancements are not contemplated within the existing net neutrality rules.

For a technical, somewhat abstract issue, net neutrality has become a surprisingly popular topic. Most consumers seem to understand net neutrality well enough to demonstrate a preference for it, which is why brands should be careful entering a debate framed predominantly in terms of fairness between the consumers and the companies that serve them.

Net neutrality exists to make sure that our gatekeepers to the internet behave responsibly and on a ‘level playing field.’ It’s no surprise that, from a brand perspective, companies have bent over backwards to communicate their ardent belief in neutrality and how it is core to their values. In an era of brand responsibility, nobody wants be on the wrong side of history. Some US-based internet providers have gone so far as to say that they believe in neutrality so strongly that they don’t need legislation mandating it. Many rightly see that as a confusing position.

Dismantling net neutrality will only serve to stifle innovation. Just as the Interstate Highway System enabled an explosion in commerce and cultural exchange, the Internet is responsible for connecting all parts of the world, and the ensuing benefits we’ve witnessed over the past 20+ years. Had we allowed for toll booths up and down the highways in the late 1950s, there’s little doubt America would not have grown and evolved as rapidly as it did.

Now we see ourselves preparing for the transition from the digital age into the age of the Internet of Things. Tilting the playing field for short-term commercial interest will skew opportunities for innovation toward those that can most afford it, resulting in prolonged life for mature businesses and outdated market models due to a diminished fear of rival upstarts. In short, the exact opposite of the theory of creative destruction.

Hmm, tough one, because it is more about how it affects media companies and end-users than the marketing industry.

The FCC’s decision could really affect the control ISPs have one which media is delivered at high speed or not. This will in terms add a new variable as far as marketing on different platforms goes. It won’t just be about context, content and target, but also delivery. You will need to worry about the platforms delivery speeds above and beyond everything else when weighing and measuring marketing channels.

The internet is like a library, and websites are like books. Your ISP doesn’t publish any books. They give you rides to and from the library, and you may bring any book home. Repealing net neutrality would give your library driver permission to restrict what books you can bring into the car, and charge you more to bring in certain books. But can’t I hire a new driver? The majority of Americans have access to only one ISP, and are powerless against anti-consumer practices.

Repealing net neutrality destroys competition. What if some publishers pay drivers to prioritize people who are carrying their books? If you publish a new book, nobody would get to read it, because you can’t afford to pay the drivers as much as the big publishers.