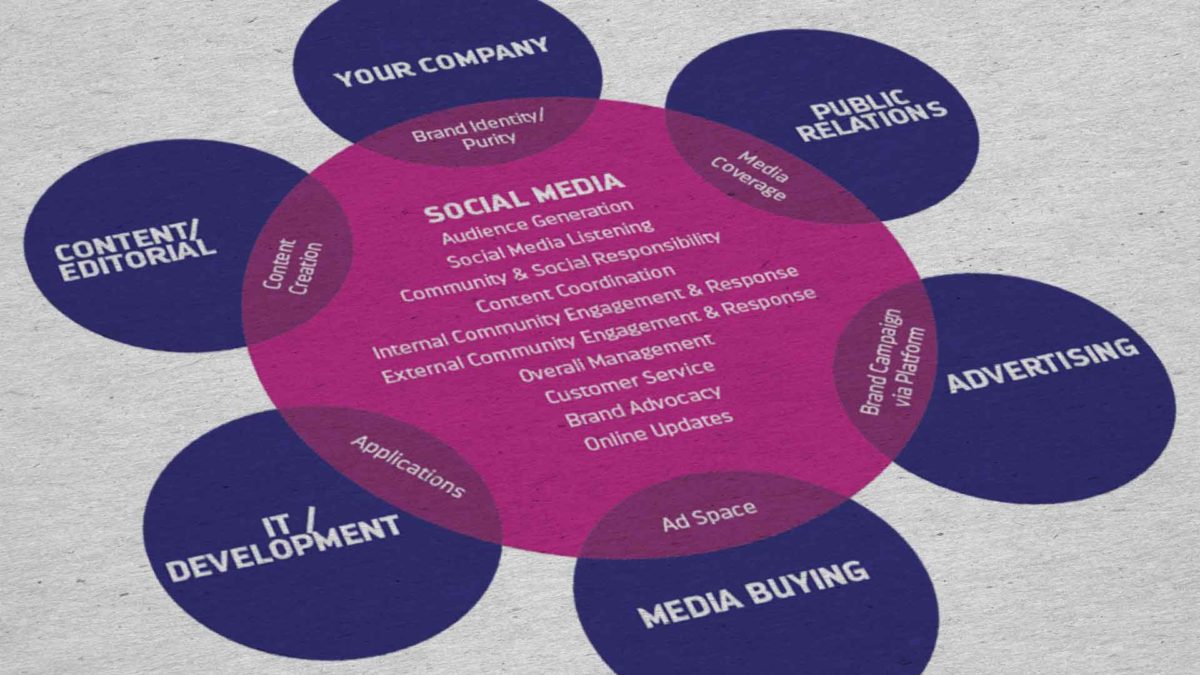 Where Social Media Falls in the Traditional Marketing Mix (With Handy Venn Diagram!)

We recently held an accidental one — day social media retreat where we over-analyzed every traditional marketing industry’s contribution to the social media space. This conversation came as a result of having been approached by a handful of larger agencies that want to partner on social media projects for their larger clients while they figure out how to roll out their own social media programs in-house. And on the flip side—having been approached by big clients that tell us that their big agencies can’t wrap their heads around social media quickly enough so the big agencies are outsourcing to companies like ours and still taking all of the glory. (Which we happen to be okay with.) So we got to talking: what’s so difficult about social media? The short answer? The “social” part.

The long answer: Looking strictly at the most traditional offerings of the different types of marketing agencies out there, we determined that it’s more than just hierarchy and bureaucracy that make it difficult for, say, advertising or PR agencies to roll out their “social media programs.” It’s that they have to, essentially, reorganize and introduce skills they never before offered. Social media done right requires more than just a slick application, which any designer/development worth their salt can conjure up at a very decent rate. (As an aside, we call this the “if you build it, they will come” approach to social media.) It also requires more than just a few witty updates and following/being followed by a million people, in hope that they’ll return the favor. (We call this the “Ashton Kutcher” approach.)

Social media requires the regular care and feeding of your profiles and engaging in continual dialogue with your audience. Social media should not be implemented as a “campaign”—this practice is a reflection of the type of company handling it (i.e. a traditional advertising company, which works in spurts or campaigns, will often naturally apply a campaign framework to its social media initiatives). Rather, it should be introduced as an ongoing program. Put differently, it’s the difference between the “fad diet” and an overall “change in lifestyle.” Sorry, couldn’t help myself.

So, here’s the breakdown of the different elements involved in a successful social media program. Of course, not all of these will be crucial to every initiative and there’s always going to be a difference between social media programs implemented by brands versus b-to-b companies versus the average Joe who just wants to socialize. And while I’m handing out disclaimers, I should also mention that none of this is to say that these agencies don’t belong in social media; it’s more so that they’re going to have to add new capabilities, which is the reason relatively smaller, newer and savvier social media companies like us can get in with big brands while they’re figuring it out. Thanks guys!

Application/Platform Development
Any agency with a design and development department should be able to create this for you. If this is the threshold on which you make your decision, you should probably rethink your strategy. This is the lowest common denominator.

Brand Campaign
A lot of times, a social media program can piggyback off a good brand campaign implemented by a brand’s ad agency of record, but it will have to be transformed into the more accessible, younger brother of the formal campaign. In other words, you don’t want to create a bunch of social media profiles that are branded with your logo and are, thus, off-putting. But it might make sense to take your tagline (and the promise that comes with it), and build an audience whose common interest is achieving that promise, not their innate shared interest in perpetuating your brand.

Media Coverage
Many larger brands like to start spreading the word of their new, fancy and glossy initiatives at the outset, but if your social media program is good, your audience will find them on their own.

Brand identity/Purity
This is ultimtely your company or brand’s responsibility. While you hope to work with a company that understands the ins and outs of your messaging and story, at the end of the day, you will need to be attentive to the initiatives taking place.

Audience Generation
This element is crucial and is not one that’s always understood by traditional agencies. For instance, PR agencies tend to approach audience generation from the perspective of conducting media outreach, and while these skills are somewhat applicable, the approach reeks of inauthenticity, which is the antithesis of everything that social media stands for. True audience generation emerges from a mix of attentiveness to and dialogue with your audience, and social media listening (described next).

Social Media Listening
This is an ongoing initiative that defines a lot of why social media needs to be a program rather than a campaign. You must dedicate resources to monitoring your social networks in effort to identify people talking about issues that are important to your overall goals and objectives (you do have goals for this, right?), as well as stand-out voices in your space. Follow, friend or otherwise connect with these people in order to build an audience of people likely to interact with your work rather than just an audience whose sole purpose is to boost your numbers for the sake of popularity. Quality, my friends. Not quantity.

Community & Social Responsibility
Bigger brands can get a bad rap for trying too hard in the social media space, as well as for being the entities responsible for destroying once-popular platforms with their overly-branded, salesy and often-intrusive efforts. A good way to negate this perception—as well as to connect with audiences on an authentic level—is to tie your initiatives to your existing social responsibility efforts. People will connect with a brand if it connects them to a good cause or if they can even benefit from that cause. Ask not what the community can do for you, but what you can do for the community…

Content Coordination
Who’s writing the content? This element is the one that differs most between consumer brands and businesses. While it’s okay for brands to assign someone to their content writing, businesses need to establish specific people as experts, and let those people share their insight (and personalities!). Many businesses will create profiles for their CEOs but then assign a minion to update the content. This almost always fails and, again, reeks of inauthenticity. As for consumer brands, there are agencies that will handle content for you and that will often do a great job with it (but many of them don’t do all of the other stuff listed here). PR agencies will also boast their writing skills (which good agencies should certainly boast). However, you want to make sure that your content and overall program is highly-controlled to maintain consistency. Also, if you’re doing this right, you’re building relationships along the way. You certainly don’t want a bunch of different people responding to messages from people who already have a dialogue with another person (confusing, right? Yeah, that’s how it is for your customers, too…). Again, you need a highly-controlled content strategy (we’ll write a detailed post about this in the near future), and you need to build authentic relationships. The bottom line is that keeping your social media program as tight as possible is always going to have the best outcome.

Internal/External Community Engagement & Response
This is related to your content strategy. If you’re running a community blog, for instance, you want to assign one person to be the moderator. This person will be the one to engage with commenters and communicate different happenings in between posts. This person will also be responsible for setting the tone of the platform—whatever it is—and I can’t communicate enough that this tone needs to be consistent.

Customer Service
Brands like Comcast and Intuit have shown the world how to use social media for customer service. Good customer service involves social media listening and weighing in on consumer comments. This activity is one that should be handled uniquely by your company if you’re a direct-to-consumer distributor. If you’re a brand that distributes to stores rather than directly to consumers, it’s okay to have your dedicated social media content person fill this role since you won’t be fielding complaints directly (well, at least not as often as direct-to-consumer brands), but you do want to make sure that this person has a direct line to someone in-house should a “social media crisis” occur in the public forum (i.e. someone bashing your brand).

Brand Advocacy
Because authenticity and transparency are such huge aspects of social media, you absolutely have to make sure that your social media team is 100% dedicated and sold on your brand or mission. Sure, you pay them to be your brand advocates, but if in the back of their minds, they’re just doing it for the money, then trust me, it will be obvious.

2 thoughts on “Where Social Media Falls in the Traditional Marketing Mix (With Handy Venn Diagram!)”